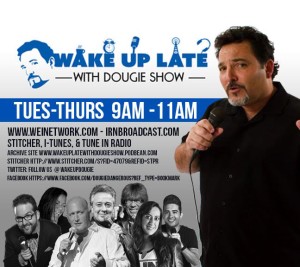 Welcome to the Wake Up Late with Dougie Show

Join Dougie & today’s co-host, Jon Levine as the open the morning discussing Dougie’s win at this weekend’s Burnt Toast Battle.  Emcee & referee, Terry Wayne calls in to discuss the contest & some of the other battles

Listen to My Podcast